July 07, 2005
This is so exciting. Today, on my way to a friend's house, I was stopped by two guys who appear to be policemen. They wanted to see my passport. Unfortunately, I didn't have my passport with me. They asked me if I could speak Thai. I answered them 'No,' and insisted to speak English. Since I didn't have my passport with me, they wanted to arrest me because they thought that I was illegal. The only IDs I had with me were Indiana driver's license and Indiana-Purdue University student ID. I showed them those and insisted on speaking English even though they didn't seem to understand me very well. These stupid policemen thought that I was from India because of my IDs, which they read 'India' for 'Indiana.' Then, I called my friend because that was what these guys wanted me to do so he could bring my passport. Although he was a Burmese, I only spoke to him in English on the phone. I asked him to come see me. Just before I finished my conversation, these guys told me I could go. They were just getting nervous because I was speaking fluent English on the phone. I kid you not my heart was also pounding and there was a peak of hormonal activities in synapses in my brain's gray matter. I instantly understood the fear of Burmese migrant workers and how police are living off these poor workers' earnings. It's basically about Bahts 3,000 -- 4,000 per head as a bribery to get him/her out. Thai police are so corrupted that they live off the poor's hard-earned money. These migrant workers lived in fear in Burma and they still have to in Bangkok. I wonder when they will be able to live and work peacefully.

In addition, Burmese government is also not recognizing these problems and is not looking for solutions whereas Laos and Cambodia are issuing passports for migrant workers from their countries so they can live and work legally in Thailand. At least, they recognized the problems and provided a solution.

Worse thing is Thai media really demonizes Burmese people. In many Thai soap operas, they often portray Burmese housemaids speaking Thai with a funny accent. As I learned more and more Thai, I am understanding what they are saying on TV about the Burmese. I don't like Thailand because of their prejudice and discrimination but I am going to live here for a long time and I am sure God wants me to understand the fear of my people and the situations they are in.


The bottom line is never speak Thai to Thai police. Speak English because Thai people want to kiss Europeans' or Americans' ass in general -- excuse my language but that's how I really felt while I lived eight weeks in Bangkok. That is true because people treated me differently if I told them I was from Burma, or I was from Burma and, later in the conversation, I graduated from an American university. Just the word 'America' sounds like 'honey from the rock' to them.

If we look at the following map, we will have a better sense of why people from Taunggyi, Loikaw, Pa-an and Dawei area are working in Thailand. 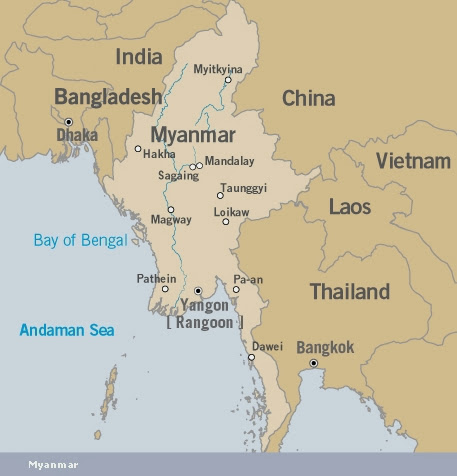