October 18, 2005
I spent all day reinstalling Windows XP on a computer at the Myanmar Christian Fellowship of the Blind. The computer I was working on was quite old. It was Pentium 3 (300 MHz) with 128 MB of RAM. Hard disk had 20 GB of space. I made 2 partitions, 10 GB each. Windows XP ran fine on this. It ran a bit slow with Norton Antivirus 2005. I decided not to have any antivirus program since they don't have Internet access to be exposed to the world of
virus and trojans anyways.

Here in Burma, we made old computers work with pirated Windows software. Linux is not a big thing because most people don't have reliable Internet connections. Nobody sells software for Linux. However, we can buy any versions of Windows, Adobe Suite, AutoCAD, Macromedia DreamWeaver and any software you name it. It cost only 500 kyats (50 cents) a piece. I love Burma. All local Christian organizations use pirated software, which cost 50 cents a piece. (Note: The maximum salary of a professor at a seminary is $20 a month.) 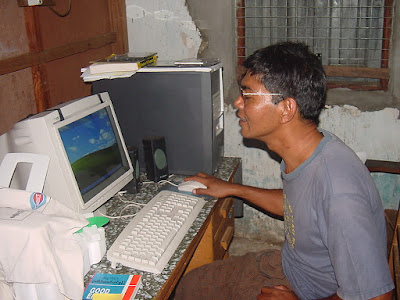