Showing posts from June, 2007
Show all

A tornado in Burma

YANGON: One woman was killed, seven injured and hundreds left homeless after a freak tornado ripped through Yangon, police said Friday.
Meanwhile in America:
New York City May Seek Permit and Insurance for Many Kinds of Public Photography

Some tourists, amateur photographers, even would-be filmmakers hoping to make it big on YouTube could soon be forced to obtain a city permit and $1 million in liability insurance before taking pictures or filming on city property, including sidewalks.
New rules being considered by the Mayor's Office of Film, Theater and Broadcasting would require any group of two or more people who want to use a camera in a single public location for more than a half hour to get a city permit and insurance.

Thieves in the former Burma's main city, Yangon, are taking advantage of outages often lasting for more than 20 hours a day to steal the copper power cables, police said on Friday.

June 28, 2007
Pennsylvania Avenue, Washington D.C, Summer 2000
I was driving on Pennsylvania Avenue when the sound of siren wailed behind me. I pulled over to the side and let them pass. I moved on within a few minutes after a few official cars passed me.

Hledan Junction, City of Rangoon (Yangon), Summer 2004
I was on a crowded bus on the way back to Insein from downtown. Long lines of cars were waiting for the green light because one important government official was supposed to pass across the Hledan junction. All of us were waiting for about half an hour in the crowded bus.

Phaya Thai Road near the Victory Monument, City of Bangkok, Tonight
I was at the Kentucky Fried Chicken (KFC) eating chicken tortilla. Some people were fixing the phone booth across the street. The police came over and told them something. They all went to the side of the street and were standing there. Surprised, I was watching them and wondering what was going on. A few minutes passed. Police cars with wailing siren…
Post a Comment
Read more

June 21, 2007
I haven't been writing anything lately. However, I am reading some interesting Burmese blogs. Khin Min Zaw's blog touched me. Very interesting experiences of the blogger.

June 08, 2007
Inner City Press published a piece of news about Myanmar UNDP. According to the news from Inner City Press, UNDP's associate administrator, Mr. Melkert, acknowledged that corruption was found among UNDP's staff in Myanmar.

Even as Melkert spoke of improving disclosure, information was withheld. While acknowledging that unspecified corruption was found among UNDP's staff in Myanmar, Mr. Melkert pointedly declined to explain the substance or even subject of the corruption.
Read more.

The blog that I noticed

June 07, 2007
I have been following Sayama May Nyane's blog recently.
Sayama May Nyein (Nyane) is a well-known Burmese writer and a former Burmese literature lecturer at Rangoon University. She is currently living in exile.

Internet Censorship in Thailand on the rise 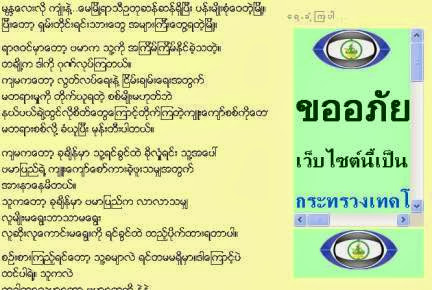 I have noticed that Internet censorship is getting worse in Thailand. Here is the screen shot of the chat box being blocked by Thailand ISP. The chat box is being used by several bloggers hosted on blogspot.com.

Screen shot of May Nyane's blog

June 05, 2007
Professor Rohan Samarajiva from Sri Lanka wrote the following notes in LINREasia's blog.
LIRNEasia and ISEAS organized an expert forum on ICT indicators in Singapore in March 2007. On the 26th of January, the Myanmar Ministry of Post and Telecom sent an e-mail to the ISEAS in Singapore, nominating an officer to attend. That e-mail reached ISEAS yesterday (4th June 2007; more than four months later).
Does this not suggest a need to radically reform the Myanmar ICT infrastructure?