Showing posts from June, 2011
Show all

Life is like six billion people playing chess against each other 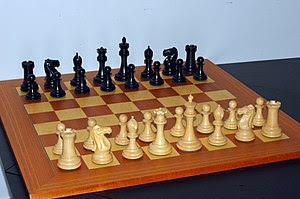 Image via Wikipedia I have been thinking about the complexity of life. Assume that we have six billion people on earth . Let's also assume that each of us is interacting with every other person on earth. Each of us will be interacting with (6 billion - 1) people. Life would be as if six billion people are playing chess against each other. This is a combination problem in Math. Using the formula for combination, the total number of games going on with the above assumptions would be:  factorial(6 billion) / factorial(2) * factorial(6 billion - 2) Why did I say, "Life is like six billion people playing chess against each other"? In the game of chess, you have to think ahead of what your opponent will do. And his move affects your decision to make your next move. It's very similar to life, where we are making decisions daily and those decisions are influenced by various factors including what other people act or move for their benefits. Of course, this is a simplificatio
Post a Comment
Read more
More posts